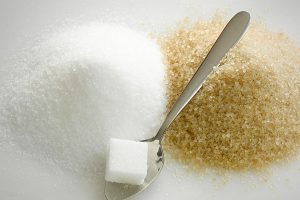 Smell: Free of any smell

The bulk of the world’s VHP sugar is produced in Brazil from high sucrose sugar cane. In Brazil, most sugar cane is grown in the center south region adjacent to and in the Sao Paulo state. This region is well known for its large expanses of flat fields, fertile soils, and clement climate which are all ideal for growing sugar cane, which thrives in tropical or subtropical climates. Brazil is well known for spending much time and energy in the pursuit of better strains of sugar cane that grow faster and have higher sucrose contents than traditional forms of sugar cane which are still grown in many countries. This investment of time and money has paid off with high yield crops which are eminently suitable for the production of VHP sugar.

Sugar cane is generally planted in the summer months, left to grow between twelve and sixteen months, and then harvested in the cooler months. Typically the harvesting season in the Sao Paulo region of Brazil runs from May through to November.

VHP Sugar Production
There are several steps involved in the production of VHP sugar. First, the harvested cane must be shredded and cut in preparation for milling. The cane is then sent through rollers and subsequently through crushing devices that squeeze the juice out of the cane, separating it into two products, sugar juice, which will be refined into VHP sugar, and dry fibrous material known as bagasse, which will be recycled or used as fuel.

The sugar juice is then piped to a different part of the mill, where it is boiled in vacuum pans to remove excess water and concentrate the sugar content. Sugar dust crystals are then added to the juice to encourage the growth of sucrose crystals, which form around the dust crystals. When they are fully grown, both the liquid and the crystals are fed into a centrifugal chamber which spins the mixture at very high speeds, driving the liquid content away from the sugar crystals. What is left is high grade ‘A’ sugar and ‘A’ molasses (also referred to as first molasses). The high grade ‘A’ sugar is known as VHP.

The first molasses is then boiled again and subjected to a further crystal growth process. When crystals are grown, they are once more sent into the centrifugal chamber and spun to separate crystal from molasses. The results from this reprocessing are known as ‘B’ sugar, and second, or dark molasses. The second molasses does not contain nearly as much sucrose as the first molasses, and ‘B’ sugar is also of lower quality.

The process is then repeated again, this time with the products being final molasses, also known as ‘C’ molasses, or blackstrap molasses, and ‘C’ sugar. In some cases, the B and C sugars will then be remelted into a liquid solution and recrystallized to make high grade VHP sugar.

VHP Sugar ICUMSA Ratings
Most VHP sugar falls somewhere between ICUMSA 600 and ICUMSA 1200 on the ICUMSA ratings scale. ICUMSA is an acronym, that stands for ‘International Commission For Uniform Methods Of Sugar Analysis’, which is the international body that regulates the way that sugar is analyzed.

The ICUMSA ratings system is based on a colormetric evaluation of sugar, and is carried out with an instrument called a colorimeter. This device is able to give a precise numerical reading which represents the coloration of the sugar sample which has been fed into it.

This is an effective means of testing the purity and quality of sugar because as sugar becomes more refined and pure, it loses the dark brown coloration associated with raw sugar which is relatively highly contaminated with biological agents and colorants, and becomes lighter and lighter. Highly refined sugar is a sparkling white color, whereas non VHP raw sugar can be ICUMSA 3000 or more. Because VHP sugar is so very high in sucrose and contains relatively few contaminants, it is a light brown color.

All sugar is tested according to how white it is, even brown sugar. Sugar is tested according to whiteness because the whiter sugar is, the more refining it has undergone, the less contaminants and chemicals are left in it, and subsequently the higher the quality it is. ICUMSA ratings are generally ‘reversed ratings’, meaning that the smaller the number is, the higher the quality of the sugar. This type of ICUMSA rating is known as the Brazilian SGS system, and it is the system under which we and most parts of the world trade sugar. In Europe this system is reversed, and ICUMSA 42 sugar actually refers to raw unrefined sugar. In order to simplify the sugar purchasing process, it is often simpler to ask for the Brazilian SGS rating of sugar.

But how does one know whether or not sugar is ICUMSA 150 or not? How can this be verified? The ICUMSA ratings test is carried out with a piece of equipment called a colorimeter, which is a device that gives a reading based on the wavelengths of light a substance absorbs.

ICUMSA 150 Sugar
ICUMSA 150 sugar is refined white sugar. Not quite as refined as ICUMSA 45 sugar, ICUMSA 150 sugar is still food grade and is often used by manufacturers making foodstuffs where the refining requirements for sugar are lower than those required for sugar sold direct to consumers. ICUMSA 150 sugar is in fact relatively highly refined sugar, especially when one considers that higher ICUMSA rated sugars are available, up to ICUMSA 4600 or more, but due to high levels of contamination and bacteria, these are not suitable for human consumption. ICUMSA ( International Commission For Uniform Methods Of Sugar Analysis) Ratings are ratings standardized by the aforementioned international body which reflect how refined sugar is, and thereby allow sugar to be traded across international borders with surety

Applications
It is a highly versatile product and may be employed in several applications, from domestic to industrial processes. Some of the several uses are: preparation of foods in general, soda, juice and sweetened beverage industries, brewery, baking, fondants, food industries, etc.

This site uses cookies to provide services at the highest level. By continuing to use the site, you agree to their use.Accept